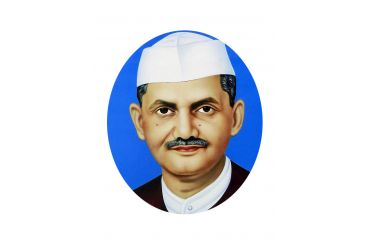 Lal Bahadur Shastri son of a poor schoolteacher, born in Varanasi in Uttar Pradesh. Self-Educated, Self made man who was inspired by his foster father, friend guide and philosopher Nishkameshwar Prasad Misra and who became an example to the fellow countrymen. A member of Mahatma Gandhi's Non-cooperation Movement he was imprisoned for a short time (1921). Upon release he studied in the Kashi Vidyapitha, a nationalist university, where he graduated with the title of Shastri ("learned in the scriptures"). He then returned to politics and went to prison many times. Shastri was elected to the legislature of the United Provinces in 1937 and 1946. After India's independence, Shastri gained experience as a minister for home affairs and transport in Uttar Pradesh. He was elected to the central Indian legislature in 1952 and became the union minister for railways and transport. He gained a reputation as a skillful mediator after his appointment to the influential post of minister for home affairs in 1961.

Three years later, on Jawaharlal Nehru's illness, he was appointed minister without portfolio, and after Nehru's death he became Prime Minister in June 1964. Shastri gave a new slogan to the people of India "Jai Jawan Jai Kisan" and laid the foundation for Green Revolution. His death is a mystery. Some say he died of heart attack after signing a "no-war" agreement with President Ayub Khan of Pakistan and some say he was killed. After he signed the no war pact, Indira Gandhi succeeded him as Prime Minister. To the last Shastriji remained a simple man, whose life-style hardly changed, whether he was a mere member of the Servant of the People Society or a Cabinet Minister or the Prime Minister of the largest democracy. He remained one among the poor. "I am not a ruler but a Servant."